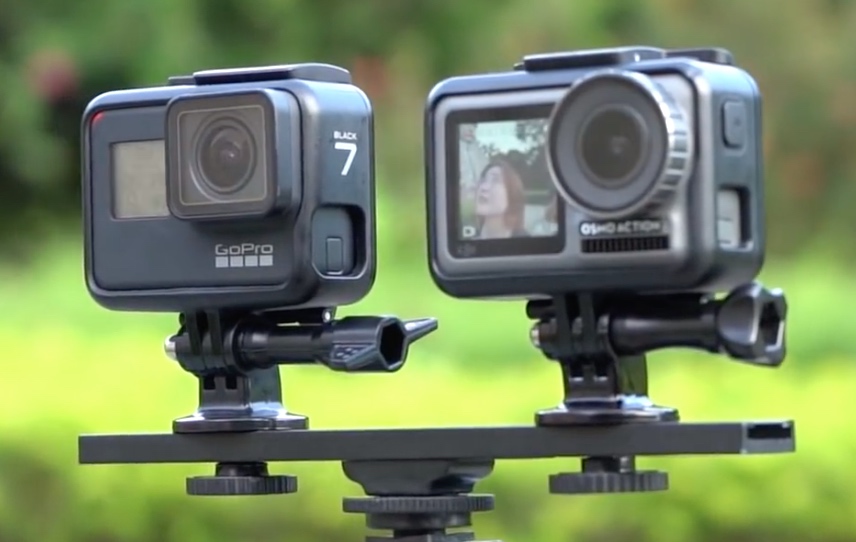 It’s been a long time coming for action camera aficionados.

Since GoPro introduced their first camera back in 2005, no one has come close to challenging the company at their game. Camera-makers have tried and failed, and then tried again, but no one has been able to deliver something better than the well-acclaimed Hero model. Consumers made it clear: they wanted a robust camera that could absorb some pain, had good image quality and decent stabilisation – and GoPro seemed to be the only one delivering. As a result, the company has grown from being a tiny lifestyle startup into becoming a behemoth of a company that is valued at over $600m with annual sales amounting to over $1bn. That’s a whole lot of cameras.

In the sidelines, however, Shenzhen-based drone maker, DJI, has been studying the action camera market with a microscope. Having dominated the multi-billion dollar consumer-drone sector, they’ve now decided to go after GoPro’s market share – sad days for GoPro, great days for us, the consumers.

There’s finally a new player in town and for the first time, a true rival to the Hero series: the DJI Osmo Action.

As you can see, the two models are nearly identical in terms of specifications. Both the GoPro Hero 7 Black and the DJI Osmo Action boast a 12 megapixel sensor that is sure to bring out the finest details of the world. They also both record video at a maximum resolution of 4K at 60FPS, meaning that your videos are going to be so sharp you’ll practically be able to slice cheese with them. On top of that, both cameras can capture slow-mo videos at 240FPS (perfect for your wipeouts) and are waterproof up to 10/11 meters.

While the two cameras have highly comparable features, the DJI Osmo Action does boast HDR video, which the Hero 7 Black does not. It’s not a dealbreaker for prospective GoPro buyers but it does mean that the Osmo Action can, in theory, capture greater details from bright and dark areas in your photos (note: it does not work with stabilisation). Furthermore, the Osmo Action can capture photos with a shutter speed up to 1/8000s or down to 120s in manual mode, making it ideal for more professional photographers who want to do long exposure shots or freeze actions in brighter conditions.

On the other hand, the GoPro Hero 7 Black packs a GPS chip that can be used to overlay videos with data such as speed – making it an ideal candidate for sport enthusiasts or “aspiring” daredevils. For those looking to break into the world of vlogging, the GoPro Hero 7 Black offers live-streaming capabilities to sites such as YouTube, ensuring that subscribers are never left in the dark.

As seen, both models have a few “spec” tricks up their sleeve but the bottom-line is: they’re both pretty phenomenal.

A lot of what differentiates the two cameras is their design. The GoPro Hero 7 is iconic by nature and has changed very little over the years. Why change something that works? It’s clean and practical, boasting a small monochrome screen on the front of the device to indicate important details such as battery life. It also has a coloured display on the back to record or replay content.

The DJI Osmo Action takes things up a notch. Instead of packing a similar monochrome screen on the front of the device like the Hero 7 Black, the Osmo Action has a full-colour display on the front that let’s you see the scene as you shoot it. While it can be a bit laggy at times, it’s a slick addition that makes shooting video easier. To add, the Osmo Action’s rear screen is larger than the Hero 7 Black, packing a 16:9 ratio that is more comfortable to navigate around and record with, especially if your fingers are on the larger side of the spectrum. Besides the obvious differences around the display, the DJI Osmo Action also has a screw-on system for changing lenses that makes swapping an ND filter or a new lens cover remarkably simple.

With the GoPro Hero 7 Black weighing 116g and the DJI Osmo Action weighing 124g, it’s practically impossible to tell the difference if you were to hold them blindfolded. Both cameras are built to a very high standard, have removable batteries and are sturdy enough to take a beating.

Both the GoPro Hero 7 Black and the DJI Osmo Action shoot at an impressive 4K resolution that will make any average activity look nothing short of epic – even walking. Videos look incredibly detailed and sharp on both cameras so preference will really fall under personal taste.

The Hero 7 Black tends to record videos that are a tad brighter than the Osmo Action as well as slightly more saturated. The Osmo Action on the other hand has a tendency to shimmer textures at high speeds, though not to a high degree.

Regarding stabilisation, the GoPro Hero 7 boasts what GoPro describes as “Hyper Smooth Stabilisation”. It’s a next-generation electronic stabilisation system that smoothens content internally by analysing raw camera motion and transforming it into stabilised motion. GoPro analyses footage in real-time and uses its proprietary shutter correction algorithm to deliver a gimbal-like stabilisation effect. If it sounds like a bunch of magic – it’s because it practically is. The GoPro Hero 7 Black produces content as smooth as jello. The Osmo Action is not far off, using a technology that DJI calls “RockSteady”. Like the GoPro Hero 7 Black, Osmo Action also provides electronic image stabilisation that utilise complex algorithms to deliver stable, shake-free footage. It’s like butter without the cholesterol.

If you’re thinking of getting either the GoPro Hero 7 Black or the DJI Osmo Action to record yourself wingsuit flying down the alps and are worried that the video won’t turn out smooth, don’t be. It will. Your time is better spent worrying about making it down in one piece.

When DJI announced its move into the action camera market, sentiment went south on GoPro. But the battle has proved more difficult for DJI than anticipated. While the DJI Osmo Action is a phenomenal action camera that packs everything one would expect and more, the GoPro Hero 7 Black does not fall short of it. The two models each have their own pros and cons but are ultimately a testament to how far film and photography technology has progressed in the last few years – pretty damn far.

The DJI Osmo Action’s front-facing screen makes it ideal for vloggers, while its manual mode is fantastic for professional photographers looking to freeze actions in bright environments or take long exposure shots. The Hero 7 Black on the other hand offers live-streaming, a great range of accessories and an incredibly user-friendly companion app.

If you’re stuck and are unsure which model you should buy, you can always rent them on Fat Llama to try them first:

Or, if you already know which one you’re after, you can buy on Fat Llama and get an exclusive discount: